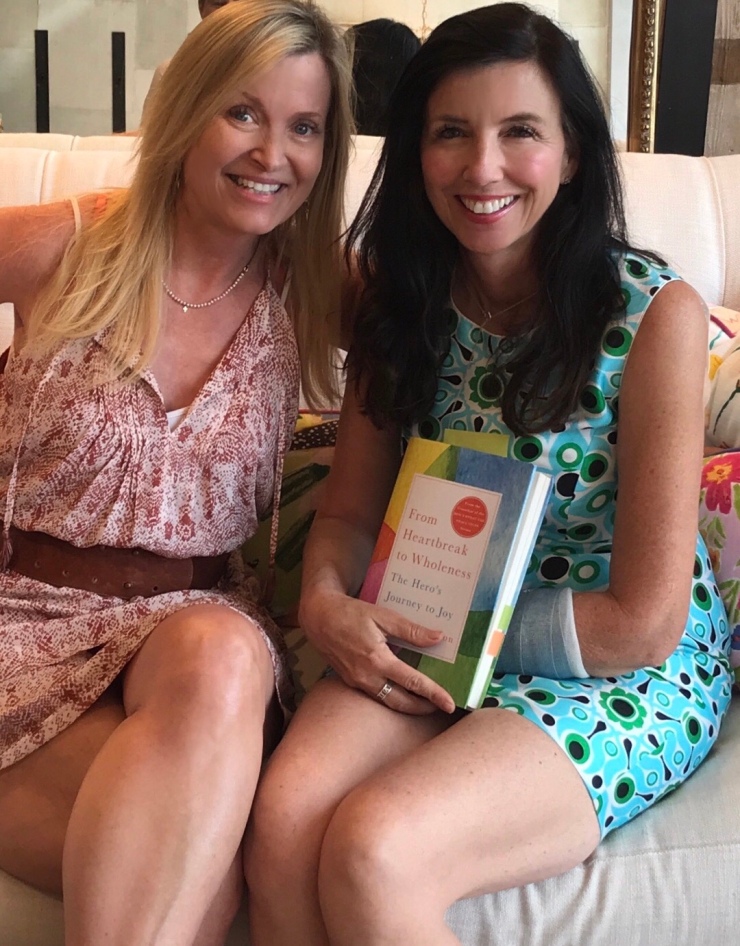 On a random Sunday, I was at home trying to decide if I wanted to attend a party up the street in my neighborhood. In recent months, I’ve sworn off anything that makes me feel uncomfortable or brings me back to the past. I dislike attending parties alone and events that pull me from my present back into my past are now typically avoided as I feel I cannot move forward while clinging to the past. Therefore, I’ve made a concerted effort to look forward, try new things, meet new people, and embrace my future.

This event would bring me back into the heart of my former life. I remember the day I met the hostess Dana Windat Dowell. My children were tiny, perhaps two and four. I was talking to Dana at Rancho Laguna Park, and when she took off her sunglasses she revealed the most stunning green eyes I had ever seen. Beautiful inside and out, we’ve stayed in touch over the years as we’ve raised our kids, and I would often attend her yoga classes. Dana is also the author of Yoga Girl, a Children’s book.

My schedule has been very busy. I’ve been working my side hustles, picked up some consulting work, and I’m doing the due diligence for my clothing apparel line. It’s been an intense period of my life, I recognize it won’t last forever, but I need to pace myself and I now literally have to schedule time to stay home to rest.

It’s also summertime, and I’ve had a good deal of social obligations and milestone birthday parties to attend, so I decided I would skip it.

As my girls headed out the door, they said, “You really should go to Dana’s. You love Dana.”

I went outside and watered my flowers and thought about it. It was a beautiful night and I could be there in five minutes and be home in the same amount of time if I was uncomfortable or tired. So, in the end I went.

From the moment I saw Dana I knew it was the right decision. She greeted me with open arms and poured me a beautiful glass of wine in her gorgeous kitchen. As we were talking we were asked to come outside because Kristine Carlson was speaking. Kristine is a powerful speaker and you could have heard a pin drop as she spoke.

Kristine and I have several mutual friends, so I knew it was just a matter of time before I met her. It was absolutely worth the wait. She gave me a signed copy of her new book, From Heartbreak to Wholeness: The Hero’s Journey to Joy. I took it home and started reading it. It was full of wisdom and held many answers to my most pressing questions.

Yesterday, I was able to meet with Kris in Walnut Creek. It was miraculous to talk to the author about what she wrote about in her book. In particular unlikely coincidences.

Over the past few years I’ve experienced synchronicities. Most recently, in one day, I had a lunch date with a man named Chris, but my truck wouldn’t start. Chris from road side assistance called to tell me he was on his way. This was confusing because I thought it was the former Chris who I had just spoken to. Later that same day, I attended a party in San Francisco and the home was owned by a man named Chris and the chef was also named Chris. When I broke my arm my orthopedic doctor was named Chris. Then, I meet Kris Carlson. When I told her this story she laughed and said the Universe was playing with me. This was good to know, as I thought I was just going crazy.

I will write more about her book when I’ve finished it. Until then, happy summer.

Love and blessings to all.

“Carlson is a New York Times bestselling author, speaker, and leader in the field of transformation. After collaborating with her late husband Dr. Richard Carlson to create a publishing industry phenomenon with the Don’t Sweat the Small Stuff series—selling more than 25 million copies worldwide—today, Kris is emerging as a profound teacher in the areas that matter most to the human heart: how to heal and how to love.

She has been featured on national radio and television, including The Today Show, Good Morning America, The View, and The Oprah Winfrey Show.